On Its Way: Kiel Centre for Globalization Officially at Work 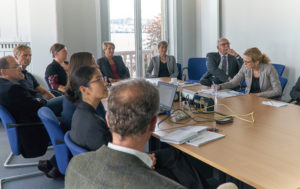 The new interdisciplinary Leibniz ScienceCampus “Kiel Centre for Globalization” (KCG) officially started working in early October. KCG is jointly financed by the Leibniz Association and the State (Bundesland) Schleswig-Holstein. During Leibniz President Prof. Dr. Matthias Kleiner’s visit at the Kiel Institute late September, the KCG Managing Director Prof. Holger Görg discussed with Prof. Dr. Kleiner about the planned operation and research directions of the KCG for the final preparation before its official start.
The KCG jointly operated by the Kiel Institute and Kiel University aims at investigating the consequences of globalization, both positive and negative, with a focus on the growing worldwide supply chains. Researchers from economics, ethics and management science with different knowledge and expertise will work in four interdependent research projects on different aspects of globalization and global supply chains.
Global supply chains are a key element of globalization. They describe complex processes, from the creation of a product or service right through to its arrival at the end customer. In the globalized world, these supply chains have an ever-increasing influence on the growth of industrialized and developing nations. While production and trade across borders leads to almost blanket supply, meaning that the market for products from industrialized nations is ever-growing, smaller states gain access to the international markets through specialization. “But trade and production on an international level don’t only have winners, but also losers and undesirable side-effects,” explained Görg, who leads the research area “The Global Division of Labour” at the Kiel Institute, and holds the Chair of Foreign Trade at Kiel University. “The Kiel Centre for Globalization therefore has the goal of researching the diverse international venues of trade and production, and to deduce scientifically sound recommendations for political and societal decision-making processes,” continued Görg.
Updates about research, publications, events, the team and news concerning the KCG will be published on this website.
Learn more about the KCG