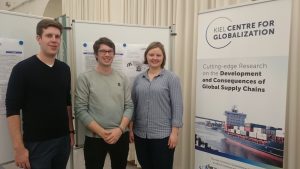 Under the title of „Was haben weltweite Lieferketten, Tuberkulose und Wissenschaftskommunikation gemeinsam?“ (What do global value chains, tuberculosis, and science communication have in common?) the KCG jointly presented itself with the other two Kiel-based Leibniz ScienceCampi, EvoLUNG and KiSOC. During the event, which started at 4 p.m. and lasted until late in the night, the involved team members presented the KCG’s mission and current projects, and discussed the general aspects of and the concerns related to globalization with the interested visitors. The topic of globalization and its effects on the labor market and the natural environment is of great interest for the public and academia alike and, hence, many people showed interest in KCG’s work. The discussions have also reinforced our confidence in the relevance of KCG’s research agenda and underlined the importance of communicating research results to the society at large, an important aim of KCG since its start.