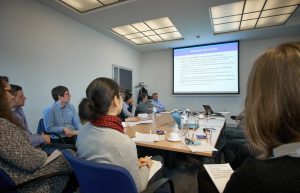 The Kiel Centre for Globalization (KCG) is a joint initiative of Christian-Albrechts-University of Kiel and Kiel Institute for the World Economy. Since its start in October 2016 and its kick-off team meeting in December 2016, the Centre has made progress in its research projects, its team-building and its administration development processes. In order to facilitate team-internal discussions, KCG team meetings are held regularly. The second KCG team meeting took place on May 11, 2017 at the Christian-Albrechts-University of Kiel. The whole 18-person team participated in the meeting to share their research progress with each other. Based on the research progress so far, KCG members also discussed about potential links between the four ongoing KCG research projects and how these links can be further explored and strengthened. The meeting was additionally a platform for the KCG members to discuss about some open organisational issues related to the further development of the KCG. The next team meeting is expected to take place in the second half of the year at the Kiel Institute for the World Economy.