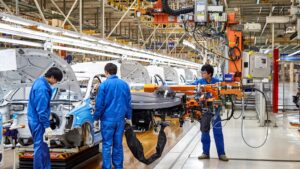 Economists generally agree on a connection between exports and innovation and the former fuels the latter. Several studies also report the existence of such export-driven innovation for Chinese exporters.

In addition to the direct impact of exports on innovation among exporters, there is a further effect, namely an indirect or spillover effect of exports. Non-exporters can theoretically also become more innovative, when information accumulated by exporters in the same region or sector gets spilled over to the non-exporters. In the case of China, such spillovers are found for multinational firms. However, there appears to be no evidence for spillovers from domestic firms.

To make some contribution to filling this gap, Prof. Yundan Gong, Ph.D. (King’s College London and KCG) and Prof. Aoife Hanley, Ph.D. (Kiel Institute, Kiel University and KCG) analyse in a new KCG study the impact of China’s exports on key innovation metrics, namely new product introductions and R&D. The analysis is based on a dataset covering over 170,000 firms in China. In their analysis, they decompose export impact into their direct as well as their indirect (spillover) components. Moreover, they differentiate China’s exports into ordinary exports and processing exports, since processing exporters are likely to have different incentives to innovate compared to ordinary exporters. Their analytical methodology allows them to control for dual sources of selection (firm and neighbourhood), thus enabling them to investigate the causal relationship between exports and innovation.

Their findings confirm that increased concentration of ordinary exporters helps catalyse new products. For the most part, this innovation boost is a direct consequence of exporting. In the case of the alternative measure of innovation (R&D), the same positive pattern emerges. This suggests that innovation outcomes seem to gain more impetus in a more crowded exporter market. Their analysis shows, however, that increased concentrations of ordinary exporters crowding out the creativity of non-exporters. The exception to this rule is for neighbourhoods with exceptionally high exporter concentration.

For more detailed information, the paper “Gong, Y. and Hanley, A. (2021), Exports and New Products in China – A Generalized Propensity Score Approach with Firm-to-Firm Spillovers, KCG Working Paper No. 24, Kiel Centre for Globalization” can be accessed here.