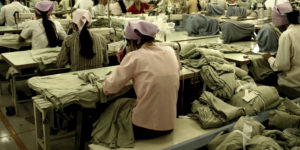 The German government is working on a Supply Chain Law, aiming at encouraging (large-sized) firms to help improve the human right conditions along the global supply chains. The Supply Chain Law in preparation has provoked heated debates. There are strong concerns particularly from the private sector that it is immensely difficult and costly to trace all steps of their suppliers along the chains to avoid malpractices. Many business representatives also argue that the requirements by law will negatively affect the market competitiveness of German companies worldwide.

Whether firms will be more willing to follow the Law and to be more engaged in improving related human rights conditions along the supply chains depends strongly on individual consumers’ and households’ willingness to pay. Even though many people in the world do care about issues like child labour, exploitation and discrimination or environmental destruction activities along the global supply chains, the complicated global production networks make it difficult for them to really identify the firms and suppliers who shall take the responsibility in avoiding and/correcting the malpractices. Even more basically, they lack information and knowledge about what actually happened at the production sites far away. The lack of information further hinders them to recognize the high relevance of the issues in concern and the emergency of any action to deal with the challenges.

Against this background, Elisa Navarra from the Université Libre de Bruxelles (ECARES) will give a KCG Research Seminar based on her recent paper “Stock market response to firms’ unethical conduct” on Oct. 23, 2020. In her presentation she will show the bias in media coverage when industrial disasters occurred in developing countries and analyse how the societies’ awareness of industrial disasters may affect stock market returns. Due to the bias in media coverage, the loss in stakeholders’ wealth is much smaller if the industrial disasters occurred in developing countries. She thus argues that there seems to be no sufficient market-based incentive to change the behaviour of firms that exploit lax regulation in developing countries, as they do not suffer reputation losses for their malpractices in these countries.

Abstract: With the escalation of labour rights’ violations and tangible environmental challenges, society is paying increasing attention to the dramatic consequences of firms’ malpractices. Using a novel dataset on 720 industrial disasters worldwide over the period 1990-2019, I first examine media coverage of these accidents and identify the companies allegedly involved in them. Even though disasters in developing countries are much more frequent and deadly, they receive much less worldwide media attention than disasters that occur in developed countries. I then exploit industrial accidents as exogenous shocks to society’s awareness of firms’ malpractices to study their effects on stock market returns. I estimate an average drop in shareholders’ wealth of 1.70% on the day after the disaster and of 4.39% over the week after. Consistently with the bias in media coverage, the loss is 10 times larger when disasters occur in developed countries. Results suggest that, despite the alarming number of industrial disasters, there is no sufficient market-based incentive to change behaviour for firms that exploit lax regulation in developing countries, as they do not suffer reputation losses for their malpractices in these countries.

The seminar will take place on Oct. 23, 2020 (Friday) online. Interested participants are kindly asked to send an Email to kcg-conference@ifw-kiel.de to receive a Gotomeeting-Link to the seminar.