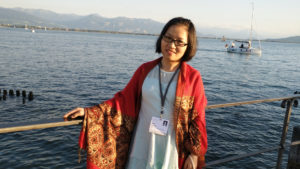 Foreign Direct Investments (FDI) are usually considered to promote development. With their FDI projects multinational enterprises bring not only financial capital but also know-how and more advanced technologies into FDI host countries where these resources are relatively lacking. FDI also help individuals and firms in the FDI host countries to have better opportunities to be integrated into the global value chains and the world economy.

For China which has received a huge amount of FDI since the start of its economic reform decades ago, FDI are found to have positively affected its economic development. Chinese firms turned to be an indispensably important part of the global value chains and the world economy. China is now also the second largest economy in the world with an astonishing success in extreme poverty reduction in the country.

While FDIs are considered to benefit development, we only know little about the effects of foreign divestment. Against this background, KCG guest researcher Haiou Mao, Ph.D. from the Wuhan University will present her recent paper “Foreign Ownership Gone, Inspiration Gone? : Analysing the Effect of Foreign Divestment on Divested Affiliates’ Innovation Performance” on June 28, 2019 in Kiel, with the abstract of the paper as follows:

This paper examines the effect of a divestment by a foreign owner on innovation performance of the divested affiliate. We use firm level data for China, combining production data from the Annual Survey of Industrial Enterprises with patent data from the Chinese State Intellectual Property Office. We compare the innovation performance of divested subsidiaries with that of continuing foreign-owned subsidiaries, controlling for the possible selection using propensity score reweighting combined with covariate adjustment. We find a positive effect of divestment on patent applications by the affiliate. The estimated treatment effects imply a substantial increase by about a half due to the divestment. By contrast, there is no statistically significant increase in R&D investment as a result of the divestment. We show that this overall result is mirrored for divested affiliates with minority foreign ownership. Those divested by majority owners also experience an increase in patenting, but also show a decline in R&D activity. We attribute this to Chinese FDI policy. Another important finding is that foreign divestment does not appear to be the reverse of foreign acquisitions. We find that acquisitions by foreign owners also stimulate patenting activity, in a similar way as foreign divestments. Hence, we may conclude that the within firm adjustment processes due to both of these ownership changes acts as a catalyst and reallocates resources to more efficient use.