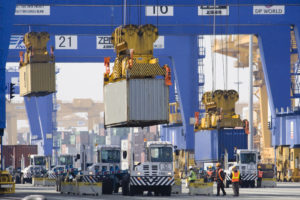 While it is widely recognised that international trade and globalization are supportive for economic growth in general, it is also clear that globalization does not only have winners but also losers and undesirable side effects. The argument that globalization intensifies inequality has been used by various stakeholders and countries to advocate more and intensive protectionist measures against international trade and globalization. The indeed strongly increasing protectionist tendency worldwide in the recent past shows that it is highly important to gain more research-based key insights into the effects of trade – both in aggregate and distributional terms.

Against this background, Prof. Simon Galle Ph.D. from the BI Norwegian Business School will give a research seminar at the Kiel Institute for the World Economy (IfW) on June 17, 2019 (Monday). The seminar will take place at 4.15pm in the IfW Lecture Hall. Galle will present his paper titled “Slicing the Pie, Quantifying the Aggregate and Distributional Effects of Trade”, co-authored with Prof. Andrés Rodríguez-Clare Ph.D. (University of California, Berkeley) and Moises Yi, Ph.D. (U.S. Census Bureau).

In the paper the authors develop a multi-sector gravity model with heterogeneous workers to quantify the aggregate and group-level welfare effects of trade. The model generalizes the specific-factors intuition to a setting with labour reallocation, leads to a parsimonious formula for the group-level welfare effects from trade, and nests the aggregate results in Arkolakis, Costinot and Rodríguez-Clare (2012). The authors estimate the model using the structural relationship between China-shock driven changes in manufacturing employment and average earnings across US groups defined as commuting zones. They find that the China shock increases average welfare but some groups experience losses as high as five times the average gain. Adjusted for plausible measures of inequality aversion, gains in social welfare remain positive and deviate only slightly from those according to the standard aggregation method.