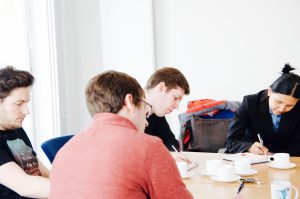 PhD Researchers are key players in the KCG team. They do preparation work for the KCG research projects, carry out the projects with project leaders, and are strongly and directly involved in transforming research results obtained into different scientific publications and presentations.

Currently there are six PhD Researchers in the KCG team. The team will be further expanded in April, when two new colleagues will join the team as well. Since they are working on four different but interrelated projects, regular face-to-face meetings among PhD Researchers are expected to be of high importance. Going beyond knowledge exchange around the projects, the PhD-Researcher Meeting can also serve as a communication platform where the KCG PhD Researchers can also share with each other their new ideas for research and their valuable experience collected along their research and doctoral processes. Key information from the KCG office can also be transmitted to the PhD Researchers at the meeting directly with occasional participation of the KCG Coordinator, who will also bring feedback and suggestions from the PhD Researchers back to the KCG office for follow-up work.