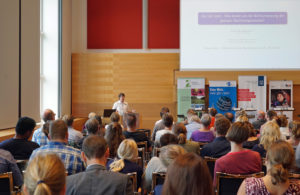 Eliminating global extreme poverty and limiting the temperature increase of climate change are long-term challenges for all. These challenges are not limited to the national boundary. Thus global governance is required in bringing individual and national efforts together to deal with them efficiently. Accordingly, in the framework of the United Nations (UN) world leaders set up the Sustainable Development Goals (SDGs) as a “blueprint to achieve a better and more sustainable future for all” (UN, 2019). The UN calls for (joint) actions in civil society and in businesses as well as national and international policy measures to help achieve the SDGs by 2030.

But what does it mean if the SDGs cannot be well achieved as planned? To share with the public the most updated research insights on this, Finn Ole Semrau (KCG Researcher) gave an invited keynote speech titled “The clock is ticking: What does missing SDGs mean to us [Die Uhr tickt: Was kostet uns die Nichtimplementierung der globalen Nachhaltigkeitsziele?]” at the event “Citizen Dialogue – Implementation of Global Sustainable Development Goals in Schleswig-Holstein” at the Landeshaus Schleswig-Holstein in August 2019. In his speech, Semrau emphasized that the current policy at all stages of the governments is not sufficient to reach the self-imposed targets of the SDGs as well as the Paris accordance. The real impact of the climate change is already measurable. For instance it is estimated that 1°C of global warming above pre-industrial levels is caused by humans. Under a business as usual scenario, within only eight years and three months (from August 2019) a temperature increase of 1.5°C might be reached (MCC, 2019). Key emitters, such as China and India, are particularly expected to intensify their efforts in reducing their environmental footprint, while the historically biggest emitters, such as the United States and European countries, face an additional responsibility in further investments and engagement in innovations to decouple economic growth from environmental degradation.

Semrau emphasized that climate change is not a challenge for the environment only. It can also undermine efforts made nationally and internationally to tackle extreme poverty, which is covered in the first SDG. Among the most vulnerable countries to climate change, there are many developing countries. They, for example, already now need to bear additional financial costs for development due to higher interest rates on financial markets caused by climate risks.

Lastly, Semrau presented the ongoing initiatives of the German government on responsible consumption and production. He recognized its efforts in developing a globally unique monitoring process and stakeholder dialogue in the framework of the National Action Plan for Business and Human Rights. Future decision on the need to implement a binding legislation depends on the upcoming results of a recent survey on how companies have integrated core elements of human rights due diligence into their business processes by 2020. However, Semrau argued that the monitoring process suffer from some methodology constraints. Since the participation in the survey was voluntary, it is, for example, possible that companies better considering human rights in their business processes strategically felt more motivated to join the survey. As a result, the conclusions derived might overestimate the sustainability records of German companies.