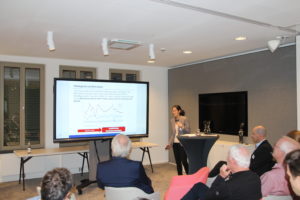 China’s Belt and Road Initiative (BRI) proposed by its President Xi Jinping in 2013 aims at fostering economic, social and political interactions between China and the other BRI countries. Many of these countries are in Asia and Europe, in line with the general perception that BRI has paid particular attention to strengthening the economic, social and political link between these two continents. Against this background, BRI with its huge size in terms of the number of countries involved and resources invested in related projects is expected to have economic impact on BRI countries and beyond, particularly those in Europe.

In order to learn more about BRI, to investigate the role of BRI for particularly Bavaria, Germany and the EU and to provide related policy suggestions, a research project with the ifo Institute commissioned by the Industrie- und Handelskammer (IHK) für München und Oberbayern and led by Prof. Gabriel Felbermayr Ph.D. (President at the Kiel Institute for the World Economy (IfW) and KCG Senior Fellow) was carried out in 2019. Prof. Dr. Alexander Sandkamp (Kiel University), Dr. Wan-Hsin Liu (KCG Coordinator & IfW), Frank Bickenbach (IfW) and Moritz Goldbeck (ifo Institute) were involved in this project.

Based on the project report that was published in May 2019 and updated information of BRI, Liu gave an invited presentation titled “The New Silk Road Initiative – Opportunities and Risks for Europe [Die neue Seidenstraße – Chancen und Risiken für Europa]” at the Annual Conference of the Institute for Applied Commercial Law [Institut für angewandtes Wirtschaftsrecht, WIRE] on November 12, 2019 in Hamburg. During her presentation she firstly explained the background and motivation of China’s launch of BRI, its goals, its scope and key elements. Liu then briefly introduced the economic mechanisms over which BRI may create further business opportunities in Europe that may foster its trade and give an additional impulse for its growth. These opportunities are, however, bound with business, economics and political risks that deserve adequate attention and treatment from stakeholders from academia, business and politics in Europe.