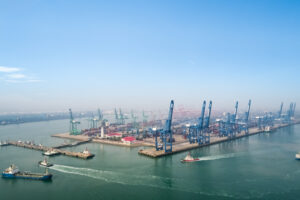 Maritime shipping has attracted much more attention from the public and politics since the outbreak of the Covid-19 pandemic. Global supply chain disruptions caused by the pandemic, shipping accidents like the Suez Canal grounding of the Ever Given and the recently increasingly severe supply shortages have all induced many to question the reliability of maritime shipping and the impact of shipping disruptions or disturbances on trade. Maritime piracy is another phenomenon that can strongly affect shipping. However, even though piracy has been a problem for a long time, to which extent it affects trade and transport decisions has received much less attention. Correspondingly, empirical evidence remains scarce.

Indeed, the fact that empirical evidence regarding the economic consequences of maritime piracy is limited does not suggest that piracy is no significant threat to maritime shipping and to global trade. To help fill this gap, KCG researchers, Prof. Dr. Alexander Sandkamp (Kiel University and Kiel Institute) and Vincent Stamer (Kiel University and Kiel Institute) together with Dr. Shuyao Yang (formerly ifo) analysed the impact of maritime piracy on trade and transport at product-, firm- and ship-level. Their recently published paper shows that maritime piracy does have a small but significant dampening impact on trade. Overall exports along shipping routes affected by maritime piracy fall following an increase in pirate activity. In addition, piracy induces firms to switch from ocean to air shipping, while remaining ocean shipments become larger. At the ship-level, the paper provides evidence for re-routing, as container ships avoid regions prone to pirate attacks.

Beyond obvious humanitarian reasons, they argue based on their findings that governments need to respond to the threat of maritime piracy. Potential responses can be, for example, a multilateral and coordinated approach to increase naval presence along routes frequently prone to pirate attacks. In the long term, the root of the problem might be tackled by improving living conditions and socio-political stability in the countries from which pirates operate.

More information about the paper “Sandkamp, A., Stamer, V., and Yang, S. (forthcoming), Where has the rum gone? The impact of maritime piracy on trade and transport, Review of World Economics” can be found here.