KCG Policy Paper No. 8: China’s Economic Transformation and Poverty Reduction over the Years: An Overview 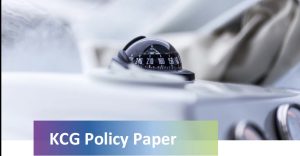 The present document examines the role of social and economic transformation in the process of poverty reduction in China. China’s economic growth and poverty reduction over the past 40 years are historically unprecedented both in speed and scale. Between 1978 and 2018 China’s economy grew at an annual rate of 9.5 percent, twice as fast as the other developing regions of the World. The proportion of those living in poverty in rural areas fell from 97.5 percent to less than one percent over this period.  There are 765 million fewer poor people in China in 2019 than they were in 1980. This means that China alone accounts for three quarters of the total reduction in global extreme poverty in that period. Although China’s growth rate will continue to slow in the coming decades, the scope for economic convergence through structural transformation has not yet been fully exhausted. Further urbanization and associated productivity increases can continue to play a critical role for poverty reduction in China. However, for progress to be sustained a number of adjustments to policy will be needed.